Towel Day with the Kindle 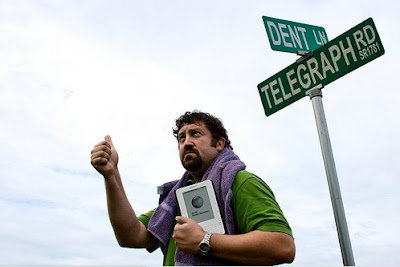 The Kindle and Douglas Adams' classic "The Hitchhiker's Guide to the Galaxy" have already crossed paths a few times in the spirit of cosmic synchronicity. In March, I blogged about Sean P. Reiser's laser-etched "Don't Panic!" K2 and XKCD's comic homage to Adams, and both stories appear in the art-related chapter of "Kindle Culture."

The latest entry incorporates the Kindle in a terrific photograph taken for Towel Day, an annual observance paying tribute to Adams and his work. "Anyone that's read the series will instantly recognize several elements of this shot," says M i k e B, the photographer who posted the pic on flickr earlier today. "I was even fortunate enough to have a Brit-worthy sky this morning!"

Not to mention being close to a Dent Lane! Mike also points out this year's overlap with Memorial Day and the importance of remembering those who gave their lives for this country, a sentiment that I think deserves repeating. I hope everyone has a safe Memorial Day and enjoys Towel Day. And thanks to Pedro Vera for reminding me in the first place.
Posted by Kindle Culture at 3:31 PM