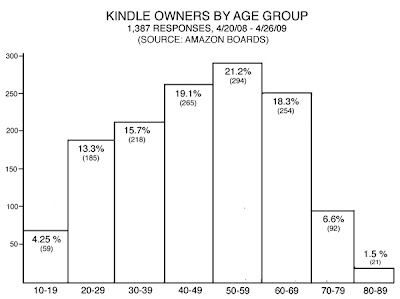 As I was pulling together the final pieces for my book "Kindle Culture," one of the last items on my list was to comb through almost 70 pages of the Amazon Kindle Forum's "Average Kindle Owner's Age" thread to get a better idea of who's actually buying the Kindle.

Though I ended up culling 1,387 responses from almost 1,700 posts, these charts don't adhere to polling science standards and should thus be taken with a grain of salt. That said, my methodology included the use of second-hand figures ("my son, 27, has one too"), and the exclusion of ill-defined ages ("I'm in my 50s"), questionable responses (106-year-old Sigmund Freud says, "I like the large type!"), and a handful of entries that were repeated one or more times.

The resulting data suggests that the largest group of Kindle owners by decade are in their 50s. The next two largest are owners in their 40s at 19.1% and owners in their 60s at 18%, making the total number of Kindle owners between the ages of 40 and 69 an incredible 58.6%. Owners above 70 make up an additional 8.1%, with owners under the age of 40 accounting for just over a third of all Kindle sales. 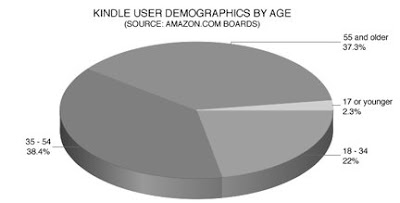 The Kindle might also be a popular 60th birthday present--more 60-year-olds reported owning the device than any other age, with 59-year-olds coming in a close second. (Another side note I found interesting was the number of respondents in their 20s and 30s who mentioned that they had been reading since a very young age.)

There are plenty of factors that could skew these results, ranging from affluency and disposable income to the overall age of visitors who visit Amazon's boards. But if these numbers are any indication, the Kindle appears to be the first general purpose technology device I know of with an early adopter demographic that favors the over-54 age bracket over the usual 18-34 group, effectively turning one perennial marketing trend on its head.
Posted by Kindle Culture at 1:08 PM